With nearly 100mm (4" in old money) of rain in October and the prospect of more to come our heavy Leicestershire clay (Denchworth and Hanslope) has called time on drilling for a while. We have about 65 acres of wheat to drill and some oats on a neighbour's farm.

The remaining wheat ground has a bad black grass problems and we have delayed drilling to apply a couple of glyphosate applications.

The earlier drilled wheat and oats have emerged well

Seedbed
Claydon worked well when used as a pure direct drill. Drilling after tine and disced land tended to pull up lots of clods, this was probably as a result of dry September weather. Rain did however come to the rescue of these slow emerging crops.

Claydon worked well after 50mm of rain soaked into seedbeds and drill tines produced a clod free tilth. However, with all big farm machinery, there comes a time when it gets to wet to continue.

Seed depth
We probably drilled some of our wheat a little deep, up to 75mm in places. We have some yellow boots on the crop, but the slugs have also found it difficult to hollow seed out at that depth.

Slugs
Pre-baited a few fields with wet process metaldehyde pellets, but switched to Ferric phosphate in all wheat sown after beans and oats. When it came to drilling we placed 1kg of metaldehyde down the drill coulter and another 1.5kgs behind the rolls. Ferric phosphate was applied at 3kgs hectare.

Blackgrass and pre-emergence sprays
All wheat has received Crystal and some diflufenican, but we have only managed a couple of fields with a follow up of Avadex. Either the wind or the rain has beaten us, but we may still get a window of opportunity.

'A positive anything is better than a negative nothing'. Elbert Hubbard

Not perfect by any means but
Posted by Farmer 'Phil' Jarvis at 13:12 No comments:

This morning's crop walking was a direct result of a Twitter conversation yesterday. The hash tag of slimy army watch had several growers reporting the degree of field slug activity. The wet weather we are currently experiencing has mobilised the hollowing, shredding and munching mollusc.

A brisk walk around our wheat crops, following oilseed rape, showed limited  signs of slug activity. The seed beds were relatively dry and cobbly when drilled, so some ideal clods for these little critters to be hiding under.

Well, we drilled the wheat at between 50-75mm depth, to get the plant developed before the slugs had chance to hollow out the grains. We may lose one or two plants that fail to reach the surface but the good news is it takes longer for the slugs to do critical damage to the emerging wheat plant.

The warm weather is allowing the crop to emerge quickly and the activity, the moisture has mobilised the slugs..
Other growers on Twitter discussing their product of choice and all dismissed dry processed metaldehyde. Ferric phosphate was the answer for a couple of the generals in the war against slugs. Another suggestion was a combination of Ferric Phosphate and mini wet processed metaldehyde.

We'll keep a watching brief with a Ferric Phosphate applications in a couple of small areas. We may have won the battle against slugs at present, but the war is not over.
Posted by Farmer 'Phil' Jarvis at 16:24 No comments:

First Steps with the Claydon Drill

Our first season with straw rake and Claydon drill (See video below).
This autumn's issues.﻿
In all fairness to the Claydon it has operated best when used as a direct drill, so lets wait and see what the crop emergence is like.
﻿
Posted by Farmer 'Phil' Jarvis at 16:05 No comments: 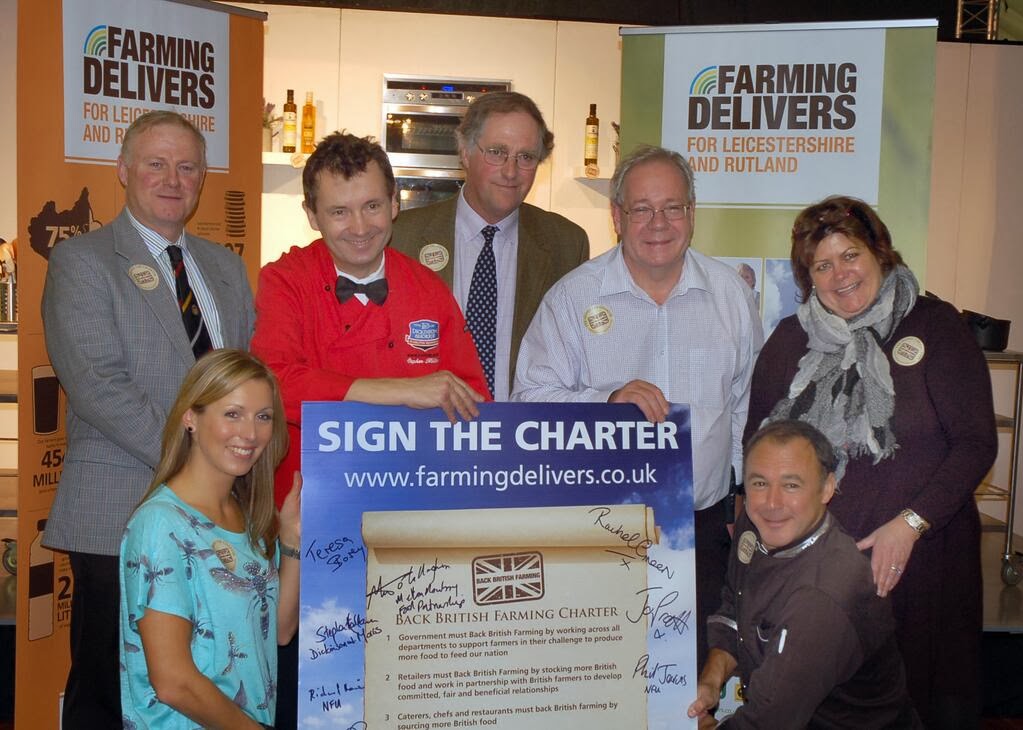 “We’re very pleased to have the opportunity to showcase Leicestershire and Rutland’s farming story. It is a very visible way of showing farming’s strategic importance to our counties’ economy, its food heritage, the landscape and our future,” said Richard Harris. 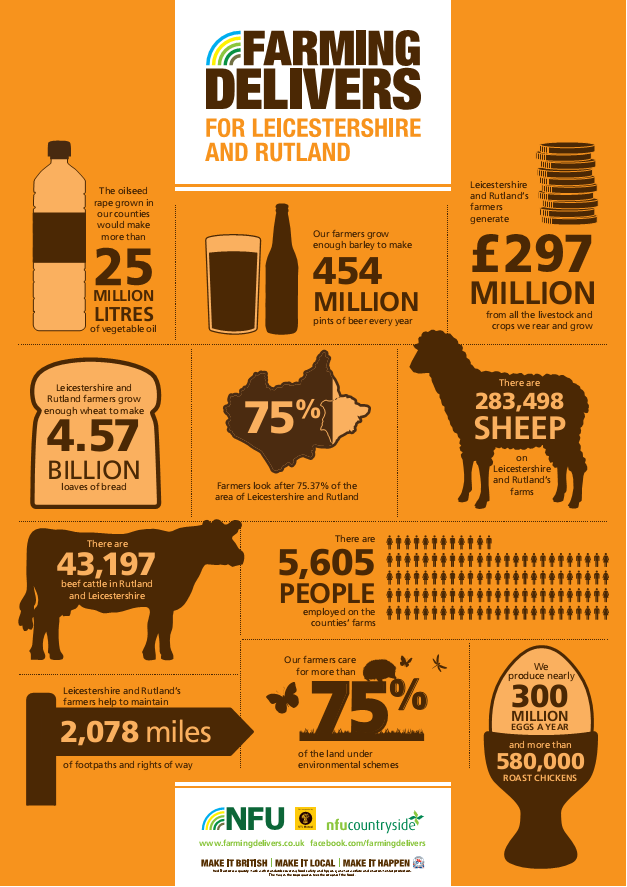 Phil Jarvis commented  "It was a fantastic event on Saturday and it's tremendous to see the number of food retailers and customers. Leicestershire and Rutland farmers should be proud of the products they produce for the food market"
Food Festival organiser, Matthew O’Callaghan says: “Melton Mowbray is very proud of its food heritage; we’re known as the rural capital of food, and we wouldn’t be here without the strong foundations and the strong links between local food and local farmers. I know that farming delivers not just great ingredients for our cheeses, pork pies and the vast variety of food we produce in Leicestershire and Rutland, but also the landscape we love, green energy and jobs for now and the future.

NFU’s Farming Delivers for Leicestershire and Rutland is the latest strand in the NFU’s national campaign, rolled out this year to showcase the value of our industry in many different spheres. The Back British Farming Charter asks everyone to sign up to support our farmers in producing food to feed the nation, to work with the retailers, caterers and government to support British farmers and to pledge to buy British food.
YOU CAN SIGN THE CHARTER HERE﻿
Posted by Farmer 'Phil' Jarvis at 23:07 No comments:

I've managed to get half our technology working !

Rain stopped play this morning, so time to catch up on a few jobs that have been on the back burner while we've been busy in the fields.
We recently sprayed the oilseed rape and I was interested to see how accurate GPS drilling was.

The crop has established well, but it has been dry and growth is slow. It is getting a drink from this morning's rainfall... 8mm in 2hours so far. 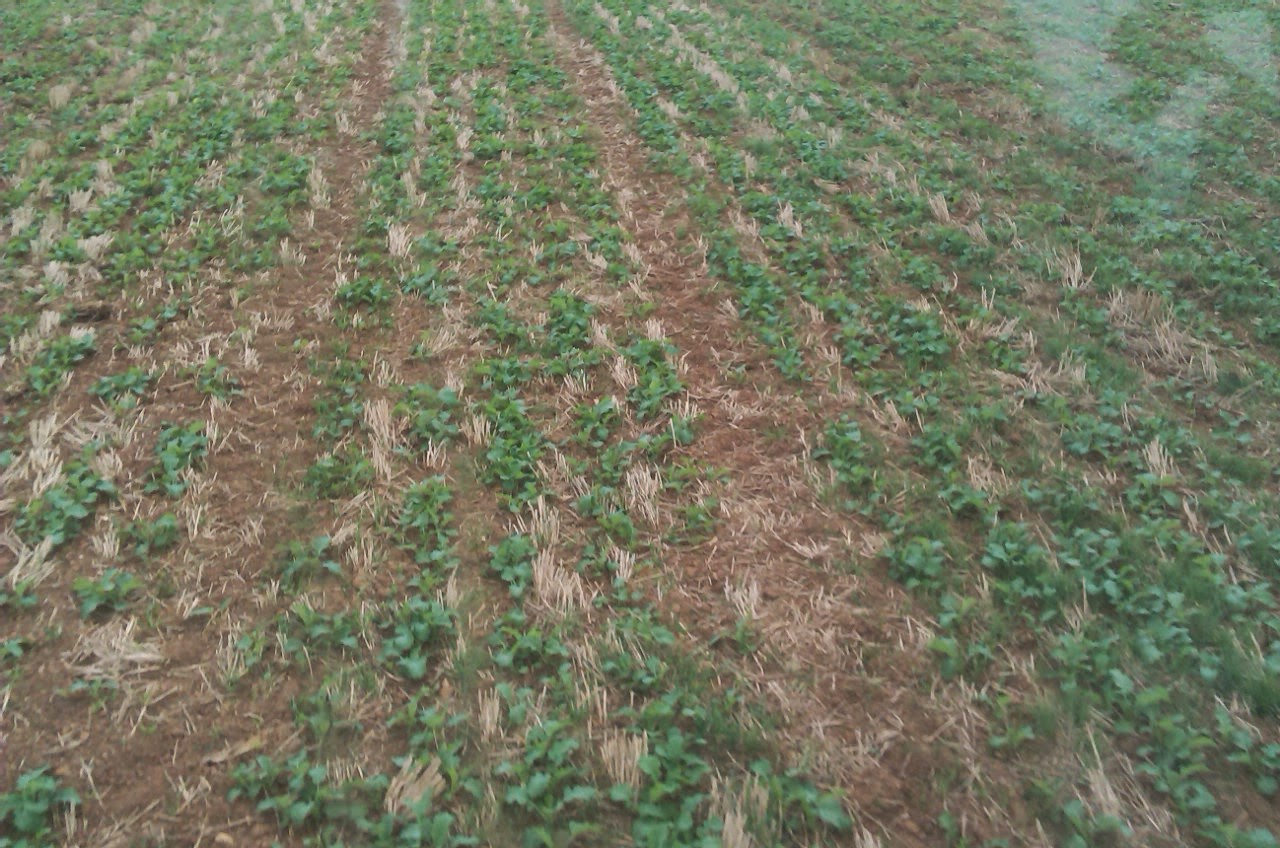 In the photo below, last year's curved tramline can be seen straddling the new straight GPS tramline 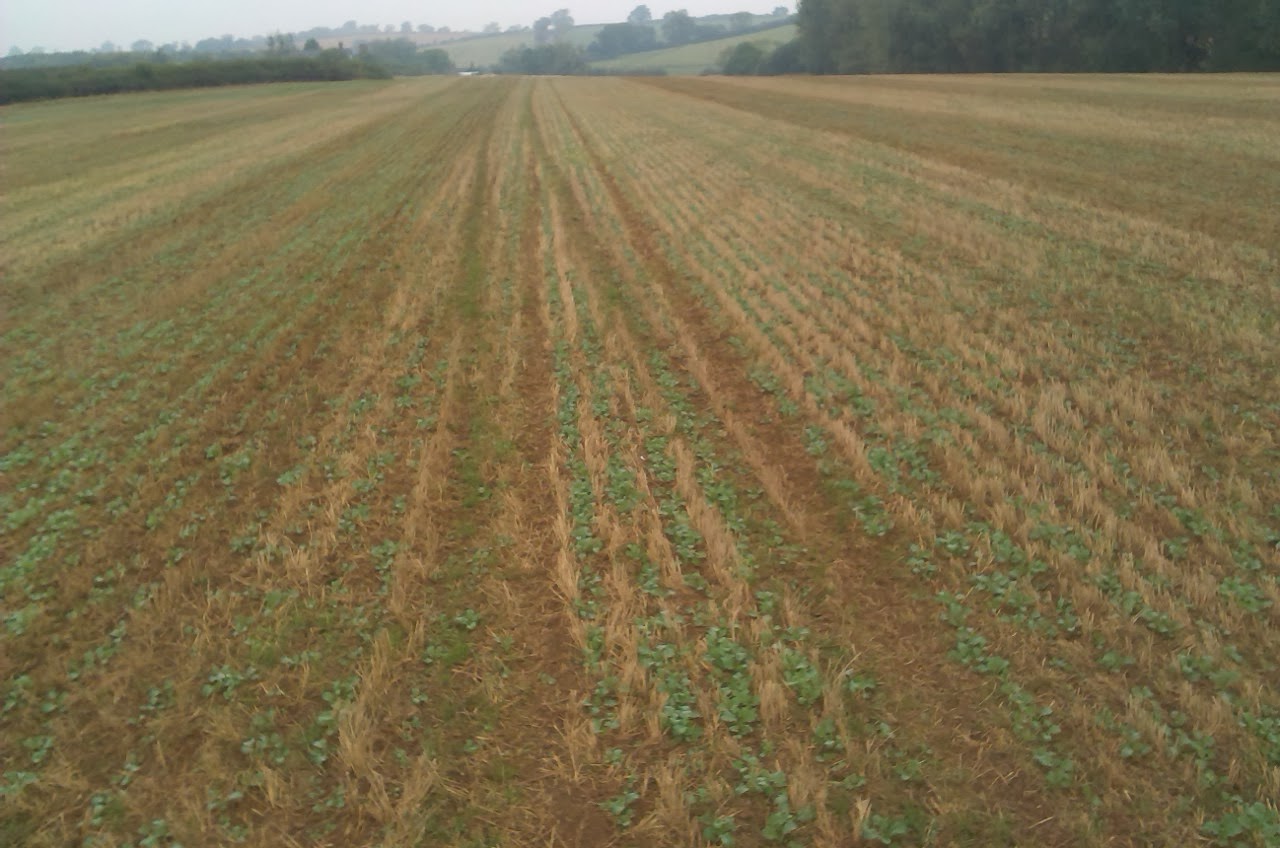 The picture below shows the sprayer route around the field, just about spot on!! 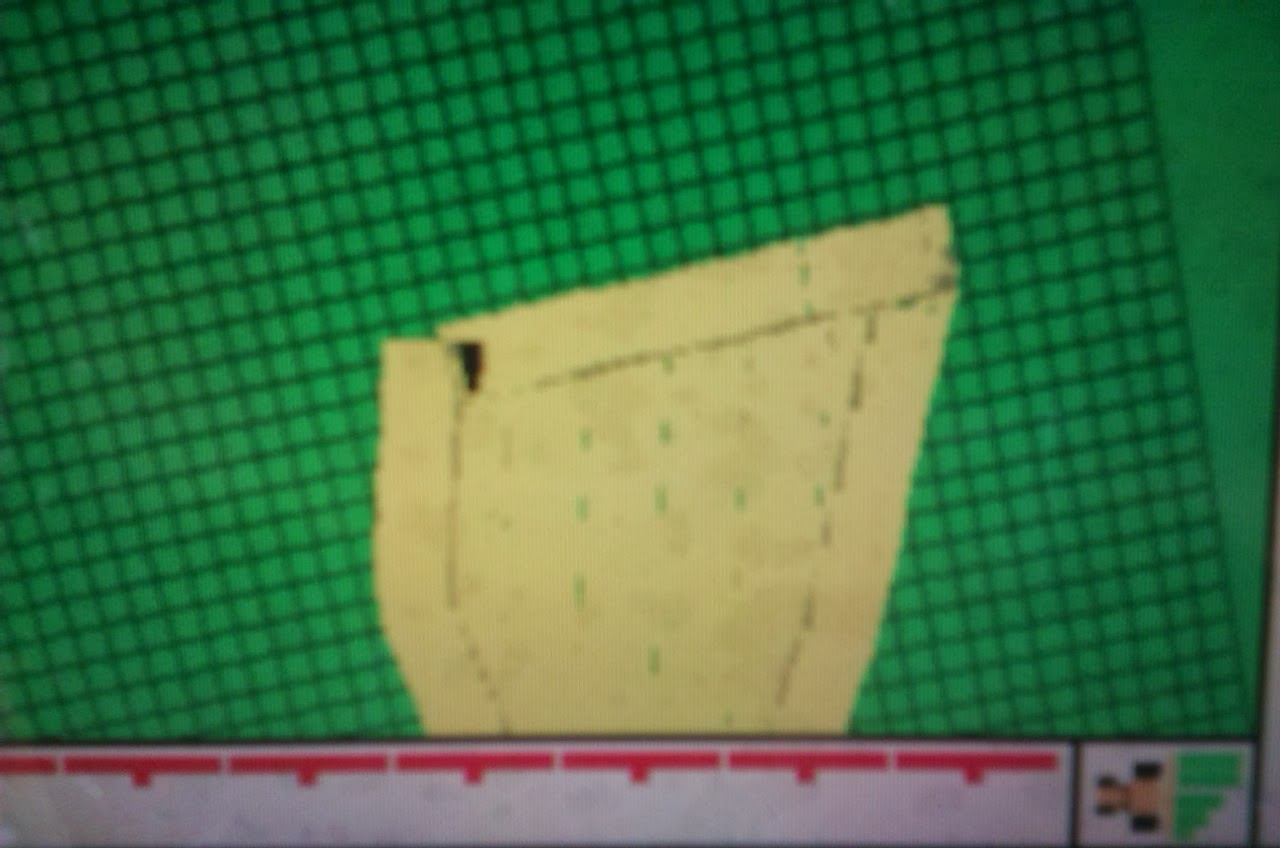 The next job was to check the crop store temperatures where the spring beans are drying, all looks well, with a click of a button the fan is turned off during the wet weather. Not bad as the store is 2.5 miles away! I suppose you could activate it from the other side of the world in the internet age 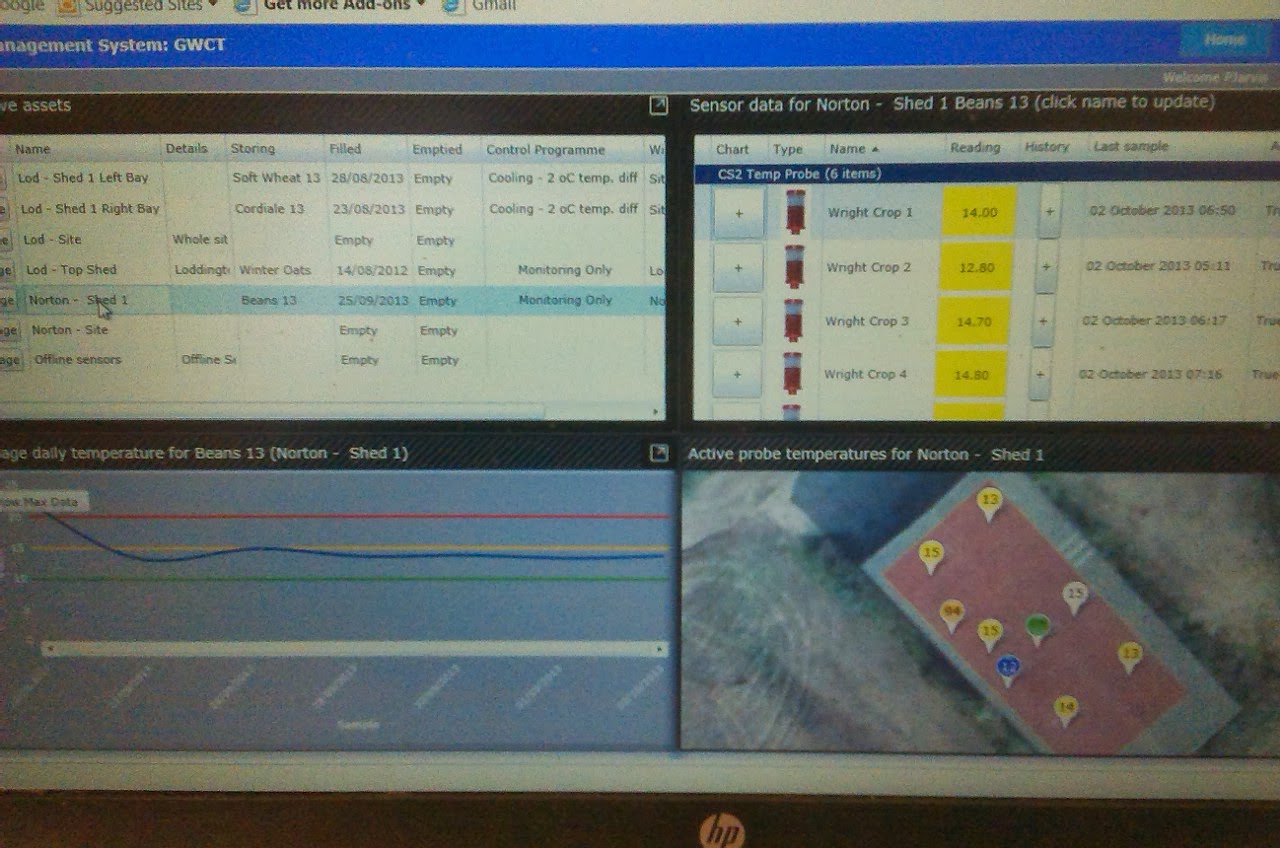 The temperatures in the store at Loddington is okay, but I still need to change some batteries in one of the sensors. I better get on with that now..... and visit the stores to make sure the computer is telling the truth. 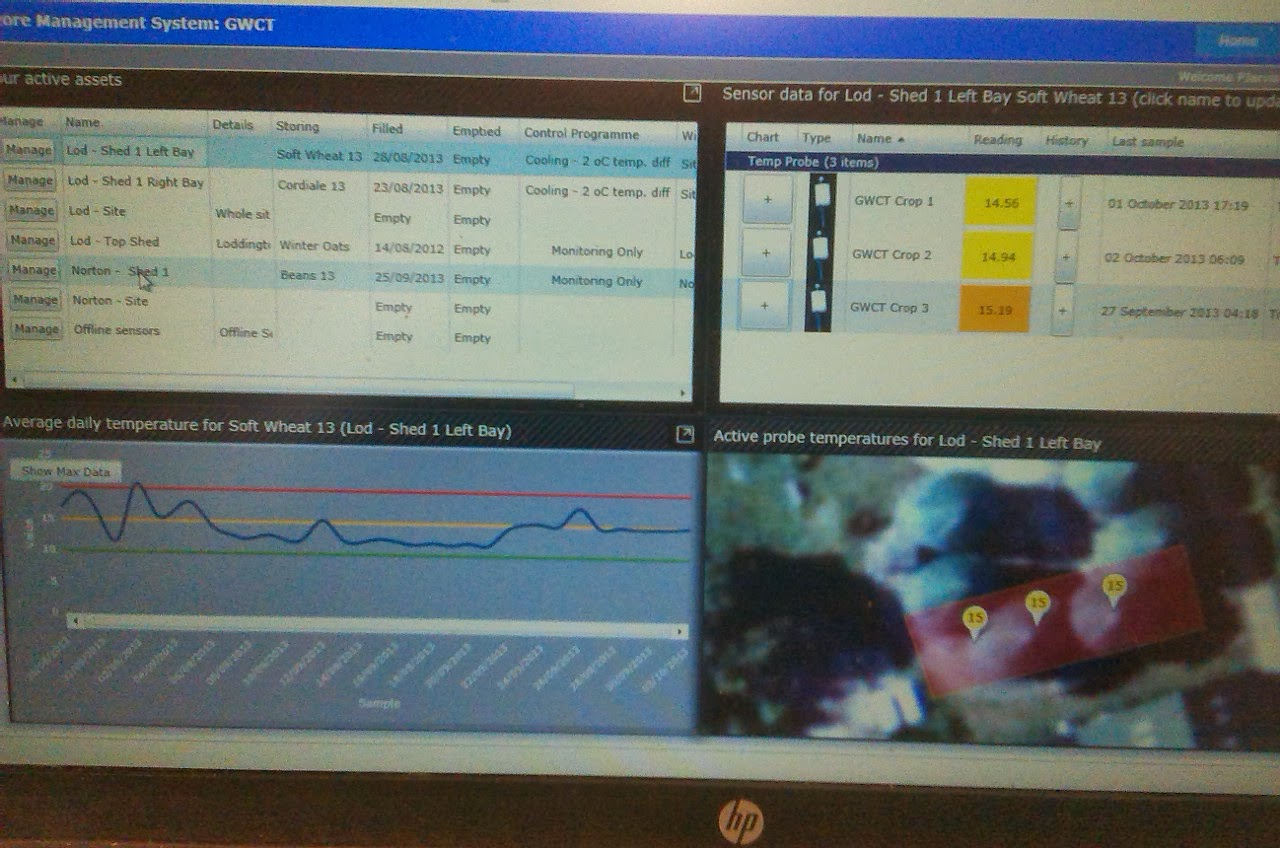 As our other technology and the GPS on the combine, that is a story for another time.
Posted by Farmer 'Phil' Jarvis at 10:02 No comments: