If it was a close run race last year about what was the number one conference issue, then rather unsurprisingly Brexit continually threaded its way through this gathering. 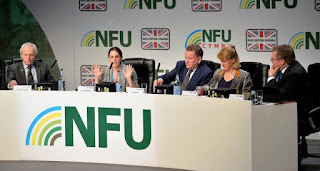 So off we go with my top ten personal highlights.

1. I was encouraged by  the theme of the Conference - Success - and NFU President Meurig Raymond gave us a glimpse of what vehicle might assist us on that journey. The three strands in the next step for a domestic agricultural policy seem to revolve around productivity, volatility and the environment. A timely reminder was made about the return to the British economy of £7.40 for every £1 spent on agriculture. HS2 is to return £2 which is surprising as its meant to revolutionise the way the country increases productivity.

2. Andrea Leadsom found some favour with conference stating she would fight to get farming the best deal at home, in Brussels and around the world. She spelled out a five point plan to guide us through this transitional period, it will be interesting to see how it looks after Government department 'deal, divide, ration, share, split, allot, dispense, allocate' the resources and other rural stakeholder consultations. There were also some reassuring words for livestock farmers on the TB eradication programme. The  Secretary of State advocated farm clusters for environmental management and recognised @Gameandwildlife 's part in promoting them.

3. Ian Wright, Director General  of the Food & Drink Federation perhaps provided us with the most entertaining speech of conference. He managed to convey the Anglo Saxson language he encountered on the way into conference and I had to admit this is the first reference to Boewolf and Chaucer I encountered in 5 years of conferences. He stressed the importance of collaboration with primary producers and the Brexit transition deal was more important than the final free trade deal. His take home message was we have to work together. Other comments such as  'If you can't feed a country, you haven't got a country' and a 'dogs brexit' and 'world class leakers' were both hard hitting and humorous.

4. The keeping ahead of the game session that looked at robotics and four farmers from different sectors highlighted there use of technology. Simon Blackmore  from Harper Adams, with his tongue firmly in cheek, did express concerns of driverless tractors being controlled by Microsoft Windows.
When the panel was asked what there next technology would be, Andrew Griffiths who has robotics milking and feeding stated that his wife said he had all his toys, so a robotic house cleaner was next. I offered the collective nouns for the panel of farmers (on social media) as a convey of..., a cluster of..., a punnet of and of course a flock of farmers.

5. George Pascoe-Watson gave a very accomplish 'Jeremy Paxman' performance (that is a compliment George) in making George Eustice and Lesley Griffiths feel slightly uncomfortable if he thought they were avoiding the question, skirting around the issue or just playing politics. The questions from 'half man half cheetah' (see later), weren't letting the DEFRA minister off lightly either.

6. The cross sector breakout ' Produce', focused on productivity and innovation. How can the research and innovation pipeline from blue skies to the practical implementation achieve this. The launch of the Feeding the Future - Four Years On brings us right up to date with the innovation needs for British Farming.

7. The Environment breakout had the simplification of agri-environment scheme administration being a clear message to Government, policy makers and DEFRA. The increase in Fly tipping incidents was reflected in the questions to the panel and Government departments have to get to grips with this 'landscape blighting' problem.

8. The Crops board had some intense discussion on glyphosate and marketing. Whilst much of this was quite technical, it importance was paramount!!!

9. This year my feeling was we were a little light on humour, but that wasn't the case with Marcus Brigstocke's after dinner entertainment. A vet on my table said ' of course we're all use to sex, basic animal instincts and functions. Marcus covered all of these and it made me laugh. Some comments were made that he looked like a young John Charles-Jones but I couldn't possibly comment.
A comment almost lost on conference was made by Guy Smith who called the fun run organiser Stuart Roberts ' half man, half cheetah'.

10. Last but not least, the conference organisation is exemplary. Thanks to those in charge, the staff, the sponsors and the venue. The organisation behind the UK food hamper to Liam Fox really shows the professional nature of this team.