'Well done to the GWCT team for coordinating the Big Farmland Bird Count, this is a fantastic initiative and gives farmers the opportunity to inform a wider audience about the birds they see on their farm. Hats off to Jim Egan, tireless enthusiasm on both radio and TV'   Phil Jarvis

I've reproduced the article that appears of the GWCT website... there are some great stats!!

GWCT’s second Big Farmland Bird Count took place between the 7th and 15th February 2015. Here is a summary of the results.

Participation
Over 950 farmers took part and recorded 127 species. That’s nearly twice as many farmers and an additional 11 species compared to the 2014 count.
The average farm size of those taking part was 975 acres giving a total area farmed of nearly 1,000,000 acres.

What did farmers see?
The table below shows the 25 most commonly seen species. 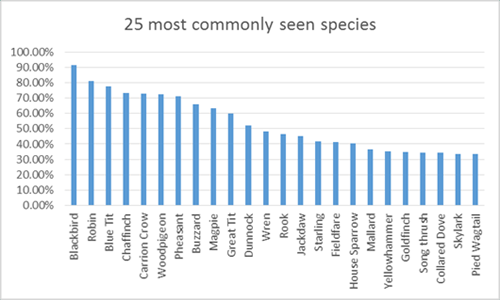 Blackbird, robin, blue tit, chaffinch, carrion crow, woodpigeon and pheasant were seen by over 70 % of the farmers taking part.
A total of 19 red list species were recorded with 6 appearing in the 25 most commonly seen species list – starling, fieldfare, house sparrow, yellowhammer, song thrush and skylark.
Ten species were recorded for the first time in 2015 and these included cirl bunting, Cetti’s warbler, whooper swan and lesser spotted woodpecker.
We also had sightings of twite, corn bunting, bittern and waxwing.

Table 2 below shows the actual number of each of the top 25 species seen: 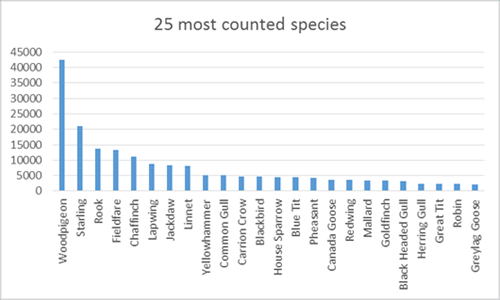 T
he five most abundant birds seen were woodpigeon starling, rook, fieldfare, and chaffinch. These are the same as in 2014 just in a different order.
Starlings and fieldfare were seen on over 40% of the farms taking part and were the most abundant red list species recorded in the survey.
This year seven of the top 25 most abundant species are on the Red List of Conservation concern; these are linnet, yellowhammer, house sparrow, starling, lapwing, fieldfare and redwing.
13 different species of raptors were recorded with goshawk being recorded for the first time in 2015

Who Counted?
The average farm size of those taking part was just over 975 acres.
The type of farm enterprise taking part reflected the full range farm businesses we had hoped to see.
64% of farms grew arable crops, 52% had beef or sheep and more than 12% grew field vegetables. There were also a number of dairy farms, horticulture units, poultry producers and pig producers submitting counts.
Over 69% of participants are in some form of agri-environment scheme.
Over 49% of participants were providing some form of extra seed feed for birds, either through growing wild bird seed mixes, or by providing additional grain through scatter feeding or via hoppers.
Over 50% of people who took part in 2014 completed the count again in 2015.

Where were they from?
Farmers from every county in England took part and there were responses from Ireland, Scotland and Wales.
For the second year Norfolk had the most returns with 64 farmers completing the survey and again they were closely followed by Yorkshire with 62.
Our participant from Austria took part again!

Where did they count?
The survey areas included important environmental features such as hedges, woodland ponds, grass margins, ditches and trees. This is shown in the table below: 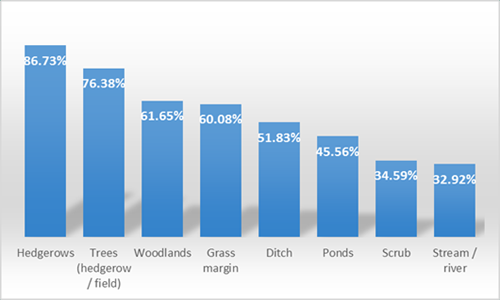 Most survey sites were next to winter cereals, grassland or over wintered stubbles.
Training

Over 170 people attended the ten farmland bird identification days we run during January to help people prepare of the count. These days gave people insight and the confidence to recognise individual birds on their farm with expert help provided by GWCT Advisory staff, The FWAG Association, the RSPB and Natural England.
We also produced a great ID Guide which was done in partnership with the RSPB and can be downloaded here.

What next?
The third Big Farmland Bird Count will take place during the week of 6th – 14th February 2016 and we are planning more training days for January 2016.
Thank you for taking part in the count / taking an interest in our results.
Posted by Farmer 'Phil' Jarvis at 10:38 No comments: