Our Food, Our Future NFU 2019 Highlights

Here are my top ten highlights from the 2019 NFU Conference at the ICC in Birmingham. The usual caveats about typos, grammar and spelling apply.

I scanned through my previous conference highlights in preparation for scribbling my 7th NFU Conference summary piece. I couldn’t help but notice some reoccurring themes of food (hardly surprising I hear you murmur, we’re farmers), the future and the logistical masterclass the NFU puts on for its members. The 2019 conference of Our Food, Our Future seemed very apt as an industry that is worth £113bn looks to a somewhat uncertain future.

So, as I rattle through my top ten highlights from this year, I’ll make the point early that the undertone of uncertainty caused a rather melancholy mood in this farmer from Leicestershire. It was soon replaced by incredulity. The position the United Kingdom finds itself in with a parliament’s MP’s squabbling over what party they do or don’t want to be in or what leader they will or won’t follow. It could have saved us a lot of angst if we’d just had this bust up in the Commons 2 or 3 years ago and saved us falling out with Europe, the home nations, families, ourselves and the Japanese manufacturing fraternity. Here ends the party-political broadcast for the ‘Know it-all Hindsight Party’.

1.     After that controlled rant it seems fitting to then give the number 1 billing to Steve Richards, writer, broadcaster and political commentator. It appeared, during his session, that we might have been at an outside broadcast, live on air as the ‘Tory Three’ joined the Chuka Umunna’s S Club 7. It’s not often politics get’s my undivided attention but the impersonations and idiosyncrasies of Teresa May, Tony Blair, Alan Johnson, Gordon Brown and Jeremy Corbyn were an engaging punctuation in a lively Q&A with Terry Jones. Eventually we did get back to the impact of Brexit on Farming but quite frankly it was extremely illuminating for a mainly rural audience.

2.       I’m not going to sing Minette Batters praise’s quite as many times as Michael Gove did during his conference speech, but I was extremely impressed in the assured and considered way in which the NFU President opened the Conference. Taking the Secretary for State to task on several occasions and providing a glorious retort to Michael Gove ‘over my dead body would British Standards be undermined… Minette said she was reasonable …. didn’t want it written in blood…but did want it written in ink. In the lead up to conference, 'the view from the President's article' in March's British Farmer and Grower was positive and proactive. It eluded to the part farmers will play in reducing green-house gas emissions and the contributions farmers will have in the meat and plant-based diet debate. The closing address recognised that her leadership would be judged, not on speeches but delivery, actions and outcomes.

3.       The Secretary of State for Environment, Food and Rural Affairs, Michael Gove is an astute politician, but there was a lot he couldn’t or wouldn’t say about the forthcoming weeks. I suspect giving Mike Rowe’s email address out to the assembled throng, to enquire about RPA payment delays, will lead to meltdown in the DEFRA e-mail server. I wasn’t let down as the speech unfolded and my favourite subject of alliterations began to ‘trip tenaciously throughout the talk!!’. Starting with some old favourites such as food and farming, we had ‘roll-on roll off’, shirk and shy, places are palatable, meet and master and my favourite ‘a hotter and hungrier world’.

4.       Jack Bobo, Vice President, Global Policy and Government Affairs, Intrexon Corporation was just the sort of speaker who livens up proceedings. His comments on how we are approaching the most important ‘30 years on the planet’ and probably the ‘most important 30 years we’ll ever have’, were a stark warning on climate and population growth. His equation of Hazard x media exposure = 'perception of risk' is one which should be retweeted after every social media scare story!

5.       The combinable crops board breakout session is certainly up there with the best I’ve attended in seven years. Jack Watts and Tom Bradshaw gave a polished ‘double act’ and BASF’s Mike Green gave clarity to the world of natural capital in modern day farming. There were 40 minutes of extremely positive probing questions to round off a session expertly chaired by Adam Bedford.

6.       Quotes of the conference; there were many that I probably misheard but here’s my interpretation of a few of them; 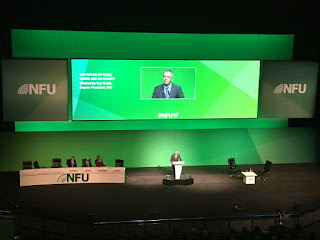 The Twitter ‘quote off’ as NFU East Midlands described Joe Stanley as ‘loquacious’ (talks a great deal) and Joe acknowledging that would be a triple word score in scrabble and then dropping ‘progenitor’ into a question to the secretary of state which had me exclaim ’eh-up’ and searching google for its meaning.

I heard the term ‘Flexitarian’ a lot during conference and I was just wondering if the last time they had come to prominence was in an episode of Star Trek?

7.       Meet Your Officeholders gave a rare opportunity to get the full team in front of the membership for some two-way dialogue in a Q&A session for those who tamed the temptation to ‘walkabout’ during the previous evening.

8.       The debate and comments around a National Food Strategy, Commission and Food reporting in the media are essential for a constructive future. I commend you to read ‘TheFuture of Food 2040’ which Andrea Graham presented to Conference.

9.       Smart meters for the RPA came out in one of the breakout sessions to improve performance, payments and practice. The source of this comment is not disclosed to protect the innocent!!

10.   I always end with the high standard of food and organisation from those tasked with running such an event. It once again delivered the logistical masterclass. It can be a thankless task gathering speakers, stage managing an event to get just the right messages to a broad audience. Well done and thanks to those that sponsored and supported the 2019 Conference.

The professional and grammatically correct conference summary will be out soon. See you on the other side of March!!!