A Tale of Two Conferences

Over a thousand participants attended the two Oxford Farming Conferences last week, the GWCT’s Phil Jarvis reports on his highlights from the proceedings.

“I managed to navigate my way through a number of events in Oxford, heard and saw plenty of signs that there is common ground. Several commentators talk about developing an organic fusion in approaches to food production and landscape management. This shared vision was evident in the architecturally stunning quadrangles and courtyards that hosted farming sessions. That is not to say there are different approaches or wide-ranging views in each camp, but the quicker this joined up thinking is presented to government the better the outcome is likely to be for the British countryside. I have highlighted OFC or ORFC initials after each highlight to show where mutual areas are shared.
My first event was the Daylesford Farm Visit which in collaboration with Agricology gave an opportunity for Organic and Conventional Farmers to tour the farm and hear speakers extol the virtues of grass leys, livestock and cover crops in a mixed farming system. Soil health was top of the bill and earthworms, non-grazed leys, sainfoin and cultivations practices all got air time and questions came thick and fast from the assembled audience. Agricology is a great starting place to develop a much more holistic picture of best practice for food production and environmental rejuvenation our farmland. ORFC/OFC

A quick dash to Oxford through a windswept countryside saw me get some top-notch science from the BBSRC Innovation Hub. Sitting on the BBSRC’s Agriculture and Food Security Strategy Advisory Panel I’m always keen to see how are scientists are delivering knowledge and innovation to the practioners. Tackling food waste, in-field herbicide-resistant blackgrass testing and drone technology all came across my radar and some illuminating discussions ensued. OFC

The Great Beer Debate, organised by Innovative Farmers brought together ingredient growers, a maltster, an agronomist, brewers and a thirsty audience. The process from field to firkin was debated over an hour in the delightful St Edmunds Hall. When I say debating, there was discussion from the panel whilst the assembled throng put Marstons and Stroud Brewery’s products through a vigorous series of taste tests. Three of the ales seemed to get the thumbs up whilst the other two were a more acquired taste. Ranking them did get more difficult as the evening progressed!! An enjoyable debate, although when the subject of drinking and glyphosate were mentioned in close proximity, it was time finish the spicy crisps and head into the night. OFC/ORFC 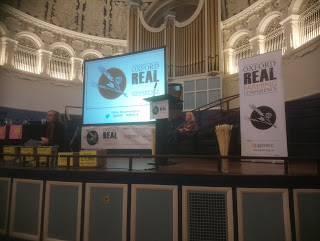 The Oxford Real Farming Conference with its four strands of farm practice, big ideas, growing and supporting a new generation of farmers and Brexit, made its’ way to the centre stage. Kath Dalmeny from Sustain made an admirable job of explaining what is in store and her props kept a complicated subject visually compelling. The Michael Gove Roadshow rolled into the town hall and the question and answer session with Zac Goldsmith was full of semantics which required code breaking to understand their full meaning. It was a championship performance in diplomatic replies from an astute politician. There is changes afoot in agricultural support payments and the ORFC audience certainly applauded the future environmental intentions.

The two other sessions I attended did fill me with some dread, not for the content or the passionate discussion, but the shear complexity of measuring farmland rejuvenation and the infra-structure that will be required to deliver a future environmental and food production policy. The potential for regulatory bedlam looms large. Many farms have small workforces, so collating meaningful measurements for soil health and greenhouse gases or planting millions of trees under a overbearing monitoring regime will cause problems. The plans by academics, politicians and NGO’s have to be practical or the complexity will become counter-productive and the tangible benefits lost. ORFC/OFC

The Oxford Union Debate’s motion that ‘this house believes that by 2100 meat eating will be a thing of the past’ pitched George Monbiot against Gareth Wyn Jones and whilst the result was probably preordained, the motion proposers presented a sound, articulate and humorous argument. I did feel that I might speak from the floor and ask if the same legislation that we could use to increase soil organic matter could be adapted to file down our meat eating incisor teeth by 0.1% per anum. So that by 2100 they would be 8.2% smaller and level with our vegetable chewing molars. OFC/ORFC

The Oxford Farming Comedy Night. Now, farming and stand-up comedy don’t appear to be natural bedfellows, but as business diversifications go Jim Smith’s is one of the more innovative. Farming in the Perth region (That’s Scotland not Australia) he certainly lightened up a late night in Oxford. Back to back shows to over 150 folk was a top effort. Jim’s conversational style certainly engaged the second shows Irish, Scottish, English and Canadian audience. He was onto a winner with farming as his subject matter, from Young Farmers, sanitised farming TV shows and a delightful exchange with Tim Papworth about how he could have helped with his injury recuperation. Now of course there are serious networking dinners and events throughout the conference but the organisers should be applauded for ‘embracing change’ and putting on a comedy show. An hour in Jim Smith’s company was tip top end to the evening. OFC 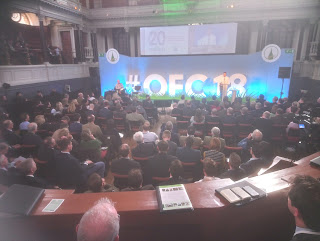 I then turned my attentions to the Oxford Farming Conference lectures in the Sheldonian Theatre. I am a great believer in delivery and style at big conferences. We spend an extraordinary amount of time dealing with the nitty gritty of everyday life and farming facts and figures. James Wong and Eve Turrow Paul gave polished and absorbing narratives on the challenges facing our industry and the ‘tribes’ of people that make decisions on the food that we produce, but they eat.

As Michael Gove and Dieter Helm had reminded the OFC on Thursday, the direction of food and farming is environmental. It could alternatively be described as payment for public goods, natural capital or helping ecosystems, it’s easy to get confused with the terminology.  The conference continued with this theme and talked about the birds and bees. What were the policies and practicalities of greening and biodiversity likely to look like over the coming years. AHDB’s Paul Temple made it clear that farmers were a large part of future solutions to a rejuvenated farmed landscape. OFC/ORFC

Steve Murrells explained another sort of rejuvenation to a British institution. It was his message to the conference, to support and champion the Co-op as it goes about championing British produce, that hit home to me.

I congratulate the organisers of both conferences, the humour from Caroline Millar at OFC certainly could have neatly fitted into a routine at the comedy night. I know her committee have worked tirelessly to put together the programme and the final day lunch was a triumphant taste explosion.

My final words are about Mark Lynas and his tentative 7-point plan for a peace treaty between anti and pro-GMO warriors. Now we’re all looking for common ground and we need to get off our polarised pedestals and Mark probably has a blueprint that a future Agroecological approach to food production requires. It would be wise for all sides to open their ears and reduce their oral volume. OFC/ORFC
Posted by Farmer 'Phil' Jarvis at 23:09